So I was going to garage sales last saturday and I picked up this beauty. 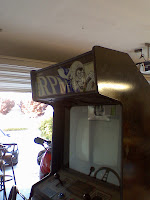 Its called Max RPM, by Bally Midway, it appears to have been released in 1986.

What I was told by the previous owner is that he received it as part of payment of a debt from someone. He was told it worked, and it turns out it didn't work.

I decided this would be my "car" Man Project. You know how guys have that car or woodworking project in the garage to work on when they need some time alone, this will be mine.

The Arcade came with the schematics needed to get all the wires hooked up right and working. 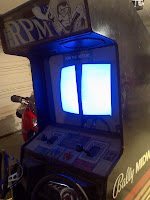 First I powered it up just to see if it worked, the screen powered up but no video, so I needed to investigate.

When I opened it up I found a few things. 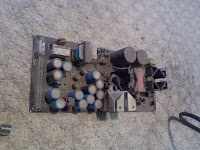 This board wasn't hooked up whatsoever and it looked important. 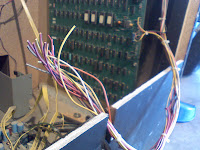 When I looked around a bit I found this mess, looks like someone cut off the connector. It's ok I have the schematics, I decided that rather then wait around for a connector (Ok, too impatient because I thought this might be the only problem) I soldered them on to the male pins of the board above.

Well I have power going to the boards and I can even hear feedback on the speakers. 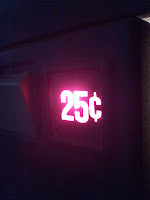 Next I wanted to tackle the lights in the front, I really like the $.25 lights because they just remind me of playing in the arcade when I was growing up, once i got power going from the above work, I measured and it looked like there was 14V across the bulbs, thinking that most cars were similar I found some car light bulbs that looked pretty close and plugged them in and Voila we were in business.

So what it looks like I have left for this project is outlined below: 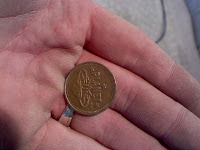 I also found some tokens in there as well as the key and lock to the back of the unit, the guy i bought it from lost the key to the front so I had to remove it from the inside, I can get it replaced when I finish up, but no sense in doing it until I'm ready.

I'll keep updating costs and detailing what I find out as I go along, keep following as I finish this project.

If you know anyone who has an Arcade that doesn't work that would like to get rid of it, maybe I'll be able to feature it here!
Posted by Tyson Bailey at 8:12 AM

Email ThisBlogThis!Share to TwitterShare to FacebookShare to Pinterest
Labels: Arcade