I was in my Computer Logic and Design class and was noticing something about figuring out how to setup a sequence recognizer for an equation of the form xk+z, on our last test we had the equation 4k+3, now that just plain had me stumped. Apparently the teacher had gone over a similar problem in class, but either I had not attended that day, or well I think I might have ADD because I don't think I've actually managed to follow along for an entire class ever. Back to the point of the post.

We got the answer guide and I noticed something there were 4 states, the question went something like this:
Create a state diagram of the following equation: 4k+3, for example when you have gotten 3 1's you will output a 1, then when you get 4 more 1's you'll get a 1...so on and so forth 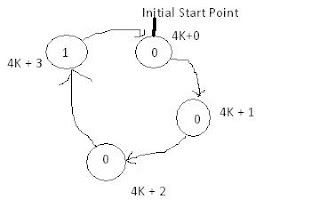 So I thought to myself well then if you have z (from 4k+z) then you must need z+1 states,
additionally you would get your first 1 on the zth state.

After trying to get the teacher to understand what I was asking (one reason I'm writing this blog is to learn to become better at explaining myself), she finally agreed that my assumptions were correct.

Of course if you use another equation, I'm sure there will be some similar form you can probably find to break it into a when this do this type of situation.

Now the teacher was going over the fact that in some situations you could factor things down and do some other stuff, but you'd have to loop through your State Diagrams more then once, provided we are treating our output as a "mealy" output, we can determine what our next course of action is based on the input and our state, if it's simply a "moore" then we HAVE to use z states, because it only cares what it's previous state was to determine the next state.

I hope that is clear, if not please let me know, I would like to get better at explaining myself and any help is good help at this point!!!